Incommunicado does not hold international intrigue, but what he does have is home field advantage. Incommunicado is a Massachusetts-bred star that was the 2- and 3-year-old male trotting champion in the Massachusetts Sire Stakes, going a perfect seven-for-seven in that series. 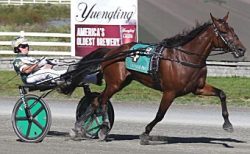 Incommunicado is a Massachusetts-bred star that was the 2- and 3-year-old male trotting champion in the Massachusetts Sire Stakes. Tom Melanson photo.

Having dual eligibility in New York, at two he finished third in the New York Sire Stake final at Yonkers. Shortly after he went on to the Massachusetts Sire Stakes and won two eliminations and the final by 17-1/4 lengths at Plainridge Park.

Then at three, Incommunicado won the Dexter Cup at Freehold and finished third in the Empire Breeders Classic at Vernon Downs. He returned to Massachusetts in September for the Sire Stakes and ran the table again at Plainridge, winning three eliminations and the final by 11-1/2 lengths.

This year he has reset his lifetime mark twice, the latest a 1:51.1, four length romp at The Meadowlands. The following week he drew the rail in the $432,000 Hambletonian Maturity but was interfered with by the starting gate and never got the chance to compete as a result.

Incommunicado comes into the Spirit of Massachusetts most likely in the best form of his life and knowing this surface so well should give him a definite edge as he vies for the prize.

“Incommunicado has won a lot at Plainridge because he likes tracks shorter than a mile. He has come on as an older horse but he will need a good trip here and if we get a check I’ll be happy. There are some real good horses in this race. Lovedbythemasses is a very good horse so it won’t be easy to beat him. It’s a very good race,” said Svanstedt.

Post time for the first race on Sunday is 2 p.m. For complete entries for the program, click here.